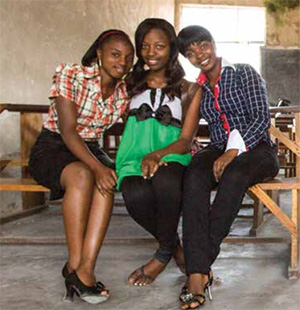 These three women received scholarships to attend law school from the Legal Scholarship Fund for Congolese Women, which is supported by donations from the ABA Fund for Justice and Education. (FJE courtesy photo)

As the charitable arm of the ABA, the ABA Fund for Justice and Education helps support more than 200 law-related public service and educational programs each year. Earlier this month, the FJE released its annual report (PDF) for the period from Sept. 1, 2015 to Aug. 31, 2016.

In addition to a list of individual and organizational donors, the report outlines how the FJE spent the $71.67 million budget. Less than 2 percent of the budget went to administrative and fundraising costs, leaving more than $70 million to be spent directly on the charitable programs which accomplish FJE’s goals. These include expanding access to justice, promoting diversity, safeguarding civil liberties and advancing the rule of law internationally. The American Bar Endowment was one of the FJE’s largest donors, providing more than $3 million in 2015-16.

Here are some of the projects highlighted in the FJE’s annual report, which were made possible through grants and donations:

• ABA Free Legal Answers. Since its launch last August, more than 6,600 civil legal questions have been submitted by low-income Americans, and more than 2,600 lawyers have registered to volunteer their services. The project hopes to expand to all 50 states in the near future.

• ABA Veterans’ Claims Assistance Network. Established to assist the U.S. Department of Veterans Affairs with a large backlog of disability compensation claims, the network has given about 3,300 veterans access to free legal assistance to file their benefits claims. More than 700 lawyers were involved in providing this service.

• DRC Legal Scholarship Fund for Congolese Women. As part of the ABA Rule of Law Initiative’s mission to “build sustainable institutions and societies that deliver justice, foster economic opportunity, and ensure respect for human dignity,” ROLI has been active in the Democratic Republic of the Congo since 2008. In 2011, a scholarship was established to allow Congolese women to pursue legal careers and help break the cycle of gender violence in the country. More than 30 scholarships have been awarded to date.

• South Texas Pro Bono Asylum Representation Project. Known as ProBAR, this organization was established by the ABA in 1989 in Harlingen, Texas. It has spent more than 25 years providing legal representation to asylum seekers at the southern U.S. border. During the recent spike in unaccompanied minors crossing the border in search of safety, ProBAR provided representation to more than 10,400 detained children and nearly 2,000 adults.