Poll: Which caption about putting a ring on it is your favorite? 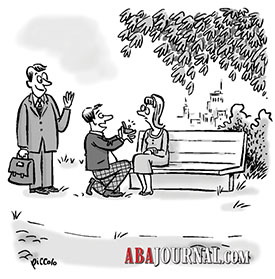 We had a great time reading captions about this suitor bringing his best man—his lawyer—to his marriage proposal. Now it’s your turn to decide on the best one. The caption with the most votes will appear in an upcoming issue of the magazine.

• “The terms and conditions were drafted by Pete here, but the sentiment is all mine.” —Submitted by Mike Matesky of Seattle

• “Will you do me the honor of merging our portfolios?” —Submitted by Joseph Enslen of Grand Rapids, Michigan

• “I put him on retainer for the 50 percent chance this diamond is not forever.” —Submitted by Bruce Rand of Woodstock, Georgia

How to vote: Using our poll, select the caption you think best fits the scene depicted in the cartoon.

What’s the prize? Bragging rights. Plus, the winning caption and credit to the caption writer will appear in an upcoming issue of the ABA Journal.

For complete rules, follow this link. To view past cartoons, check out this gallery or follow the Cartoon Caption Contest RSS feed.