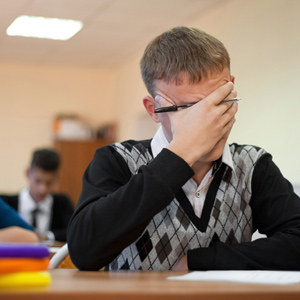 Updated: Following the U.S. Department of Education’s announcement that it’s cutting off federal student financial aid at Infilaw System’s Charlotte School of Law in North Carolina, students say they’re scrambling to figure out what they’ll do next.

They blame the for-profit law school—which in November was found to be out of compliance with ABA-accreditation standards and placed on probation—for misleading them, the Charlotte Observer reports.

“We keep being told that the administration was so surprised. Then you read what the government released. How can you possibly have been surprised?” asks student Margaret Kocaj, who is scheduled to graduate in the spring of 2017.

The DOE’s findings about the school can be found here (PDF). The DOE letter says that the school “substantially misrepresented to students and prospective students the ‘nature and extent’ of [Charlotte School of Law]’s accreditation and the ‘appropriateness of its courses and programs to the employment objectives that it states its programs are designed to meet.’ “

The ABA first informed the law school that it was out of compliance with various standards in February 2016, and again in July 2016. That information was not publicly disclosed to current or prospective students, according to the DOE, until November 2016 when the school was placed on probation. The standards in question include 301(a), which states that law schools must maintain a legal education program that prepares students to be lawyers, and 501(a) and (b), which address admissions policies and practices.

The Charlotte law school appealed the ABA finding, and it was upheld (PDF) in October. At that time, the council of the ABA’s Section of Legal Education and Admissions to the Bar placed law school on probation; it remains an accredited law school.

“The ABA repeatedly found that the Charlotte School of Law does not prepare students for participation in the legal profession. Yet CSL continuously misrepresented itself to current and prospective students as hitting the mark,” U.S. Undersecretary of Education Ted Mitchell said in a press release. “CSL’s actions were misleading and dishonest. We can no longer allow them continued access to federal student aid.”

The law school’s administration promises that it will update students every 24 hours, a spokesperson told the Charlotte Observer.

Kocaj says that the students no longer trust what the school says, and some claim that the school has cut off student access to offices housing its administrators. She and other students are trying to find alternative financing or transfer to other schools.

They’re also circulating an online petition, which calls for free tuition for those scheduled to graduate in May. Additionally, it seeks to restructure or replace the law school’s administration, and demands that all grades be submitted by the end of the year, to ease transfers. The Charlotte Business Journal has more information about the petition.

Lawyers have also been contacted. Forest Horne, a Raleigh attorney, told the Observer that his firm will “vigorously investigate” the law school’s actions, to see if the students have a case.

Chuck Spellman, whose daughter is a third-year law student at CSL, says that she found out about the Department of Education decision on Facebook.

“Hell, my daughter is getting ready to graduate. I’m not faulting the government. I’m faulting what the school did to these kids, out of greed,” he says.

Updated Dec. 23 to note the lawsuit filed against Charlotte School of Law.