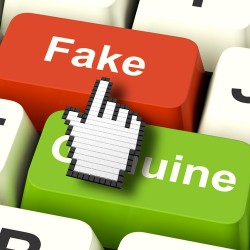 Five legal bloggers appear to be such big fans of Robert Ambrogi, author of the LawSites blog, that they repost all of his posts, all within minutes of each other.

But their blogs don’t appear to be real, Ambrogi writes at his LawSites blog. Three of the bloggers claim to be lawyers. Another is said to be a legal secretary and the fifth, a legal assistant. But none of those people appear to be real.

One blogger, for example, is said to be a public defender named Jake Gill. The blog doesn’t give his location, but a related Twitter account says he is from Braselton, Georgia. But the only person named Jake Gill that Ambrogi was able to find is located in Oregon, and his photo is not the same as the Jake Gill who claims to be a blogger.

More online sleuthing revealed that the Jake Gill photo on the blog matches that of an online profile for an endontist in Arizona.

Another blogger is said to be lawyer Joseph Quinn. Again, no location is given, though a related Twitter account lists his location as Philadelphia. The only lawyer named Joseph Quinn in that city is deceased. And the online photo used on the blog matches a photo on a personals website for someone called lonelykelvin1, said to be a 53-year-old man in Los Angeles.

Ambrogi discovered similar information about his other fake followers. He suspects the fake blogs are part of search engine optimization that is designed to build links and game Google search results, possibly for law firms.

Ambrogi is worried that consumers could be deceived by the fake accounts. “Could they be harmed?” he asks. “I’m not sure. It depends on why these accounts exist.”