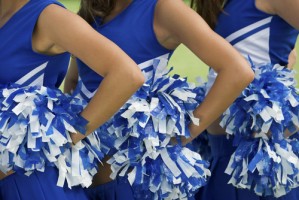 A former high school cheerleader has sued school officials who she says dismissed and attempted to cover up an incident in which her teammates filmed her while she showered and later posted the video on social media.

According to Courthouse News, B.P. sued Albuquerque Public Schools, one of her cheerleading coaches and school officials. In her complaint, she says other cheerleaders pulled back the curtain and used coach Salome Chavez’s cell phone to take nude photos and a video of B.P. The girls then passed the pictures around the team, eliciting hurtful comments about B.P.’s body, such as “who would want to have sex with her?” and “her body ain’t s**t.” The video was posted on the social media app Snapchat.

B.P. went to head coach Brittny Saavedra, the lawsuit (PDF) says, but Saavedra told B.P. she needed to apologize to her teammates for overreacting to a joke. Saavedra said she would not punish anyone because she didn’t want to ruin the trip to cheerleading camp for everyone, the lawsuit says. Saavedra allegedly threatened to make B.P. run extra laps if she pursued the matter, and prevented B.P. from talking to hotel security about it. On the way home, Saavedra and another coach sat near B.P. and repeatedly called her a baby who needed to “get over it.”

Back in Albuquerque, B.P.’s parents reported the incident to police, but Saavedra declined to cooperate, telling police there was no video. School administrators were also notified but declined to take much action. Only one of the cheerleaders involved in the incident was punished, and that girl was permitted to stay on the team. However, B.P. was excluded from cheerleading activities and blamed for a two-week suspension of cheerleading practices, the lawsuit says. She ultimately left the cheerleading team.

In the months that followed, B.P., a friend and her younger brother, also a student at the school, experienced harassment and bullying, according to the lawsuit. B.P. and her brother eventually tried to transfer to another high school, but school officials refused to authorize the transfer until B.P.’s parents signed a release waiving the school’s liability for any legal claims B.P. might have against the school. The family, which had by then retained an attorney, instead showed the district a petition for a restraining order. B.P.’s transfer was approved a few days later.

The family’s lawsuit alleges a conspiracy by school officials and discrimination in violation of Title IX; the First Amendment right to report harassment; and the Equal Protection Clause of the Fourteenth Amendment. They seek compensatory and punitive damages.