Overseeing the legal team of a company with 330,000 employees and operations in 53 countries is something that ­Securitas general counsel Henrik Zetterberg has taken in his stride since joining the Swedish security giant in 2014.

It is also an interesting time to be at Securitas, as the company is at the leading edge of a transformation of the security industry, with Zetterberg and his 65-strong team at the very heart of this.

The catalyst for this transformation is technology, which is developing at an increasingly fast pace within the security industry.

“A new security market is emerging where technology is reshaping the industry,” explains Zetterberg. “Securitas is leading an industry-wide paradigm shift towards a full solution security business by taking traditional security services such as on-site and mobile guarding and combining this with technology-driven security solutions such as electronic security.”

According to Zetterberg, this shift to technology-led security provides an on-going challenge and plenty of work for him and his legal team.

“We have to understand what this transformation means for the business from a legal point of view,” says Zetterberg. “We now have to find the right balance between the two or determine whether we should in future focus our resources on traditional security or technology-­led security as both have different requirements and different exposures.”

As part of this transformation programme, Securitas has made major investments in technology in recent years, including a number of acquisitions of electronic security companies, as it looks to strengthen that side of its business.

“We have to make sure that we have the skills and knowledge in place to support the business as best we can,” says Zetterberg. “My goal is to make sure that the legal team has the commercial knowledge to say yes and be proactive while the company goes through the transition.”

Zetterberg says that it is exhilarating to be part of a company that is trying to change an industry, and any increase in workload at certain times is always worth it.

“Legal has no purpose on its own,” he insists. “We are there to support and drive the business wherever it wants to go.” 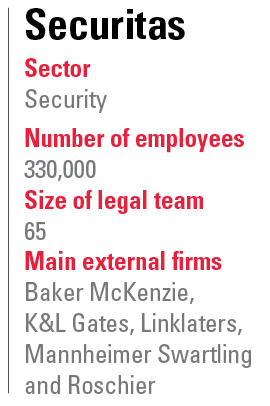 From his base in Stockholm, Zetterberg oversees a global team of around 65 lawyers. This team is divided into three focus areas – country, divisional and group. The country team is made up of approximately 55 lawyers, located in their respective countries. Their role it is to support the day-to-day activities of the local business.

The divisional team, meanwhile, consists of approximately 10 lawyers who work within one of four divisions – Europe, North America, Ibero-­America and AMEA. Within each division there are one to four lawyers who typically work on larger and higher-exposure contracts together with larger acquisitions.

Supporting the company at group level is a six-lawyer team that includes Zetterberg. Most of these lawyers also act as GC for a respective divisional legal team. In addition to developing guiding documents, the group team is also tasked with identifying how the legal team can help the business develop and deciding what the legal team should focus on.

According to Zetterberg, the way the legal team is structured is merely a copy of the decentralised management style present at Securitas which has then made its way to the legal team. Internally, the majority of lawyers report operationally to the country president and sit on the local management teams, something which Zetterberg says is integral to the ethos of the legal team.

“I want to ensure that each lawyer is as close as possible to the operation,” says Zetterberg. “I want them to understand and be interested in the business because if you can’t demonstrate either, the business will never respect you.”

“I’m allergic to lawyers who just present a problem and expect someone else to make the decision. Lawyers should have the leadership skills to make decisions themselves”

Zetterberg, who himself sits on the group management team, also spends time in the 53 countries in which Securitas operates to make sure that his global team is working in a co-ordinated way and that each lawyer has everything they need to function effectively for the changing business.

“More important than knowing what each lawyer does every day is making sure that they have the right position in the company,” says Zetterberg. “I’m interested in whether each lawyer has the right tools in place to support the business with the right decisions.”

One thing that Zetterberg requires from each lawyer is the ability to make a decision.

“I’m allergic to lawyers who just present the problem and expect someone else to make the decision,” says Zetterberg. “I believe all lawyers should have the leadership skills to make decisions themselves.”

Zetterberg is also passionate about improving his team’s efficiency, and has launched an efficiency drive. He is introducing tailor-made, web-based software in the form of a technical support platform for his lawyers to improve and accelerate processes.

“I would describe the software as a legal analysis support tool,” explains Zetterberg. “Its aim is to ensure that day-to-day work can be completed more quickly and more efficiently so more focus can be placed on the higher level and more challenging work.”

The software consists of various work streams including contract review and escalation of a task and a work stream relating to the new EU legislation on data privacy. The first roll-out of the software is expected during the first quarter of 2017 with full implementation expected by the end of the year.

“The idea is to improve quality standards and increase efficiency,” Zetterberg adds. “It provides for a much more structured and technical way of handling analysis and workflows.”

When it comes to relationships with law firms, Zetterberg prefers to keep bread and butter issues in-house due to the legal team’s superior knowledge of the business.

For more specialised mandates such as big M&A and data privacy, where expertise is needed more than business knowledge, Zetterberg goes external. When Zetterberg does instruct external firms, it is done ad hoc; there is no formal panel.

“On a global level we don’t do enough transactions to justify a panel,” Zetterberg explains. “Instead I turn to a firm which I believe is the best one for the particular type of work that we need at the time.”

Zetterberg is a stickler for set fees for budgeting reasons, and he says most firms now accept this as the norm.

“If you tell a firm that you want a fair estimate, and to only go beyond this if there is exceptional reasons, most law firms stick to it,” says Zetterberg. “If things happen that can’t be avoided or foreseen, I find that most firms are open to a sensible discussion.”

If you are an in-house lawyer with an interesting story to tell, please get in touch by using our dedicated email service.

The post Securitas GC: How to transform a company through tech appeared first on The Lawyer | Legal News and Jobs | Advancing the business of law.