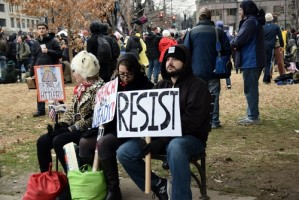 A Colorado lawyer is name plaintiff in a class-action lawsuit that claims police used excessive force against a group of legal observers, lawyers, journalists, medics and peaceful protesters during the inauguration of President Donald Trump.

The suit (PDF), filed on Inauguration Day, claims police surrounded the group “without warning and without any dispersal order.” Then the police “proceeded to indiscriminately and repeatedly deploy chemical irritants, attack the individuals with batons, and throw flash-bang grenades at the kettled individuals,” the suit says.

“None of the plaintiffs who are members of this class destroyed or attempted to destroy property, assaulted or attempted to assault any individuals, rioted, or in any way would have appeared to the police to have been breaking the law” when they were arrested, the suit says. “Further, many of the members of the class were peacefully protesting.”

Members of the group were not involved in criminal conduct, and there was no probable cause for their arrests, the suit says. Politico, the National Law Journal (sub. req.) and the Washington Post are among the publications that covered the suit.