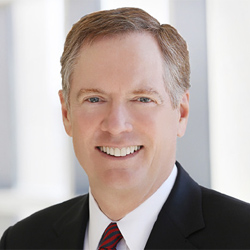 President-elect Donald Trump has picked a BigLaw partner who has criticized China’s trade practices as his nominee for U.S. trade representative.

Trump announced on Tuesday that he is picking Robert Lighthizer, a former deputy U.S. trade representative in the Reagan administration. Lighthizer is a partner with Skadden, Arps, Slate Meagher & Flom. Reuters, USA Today, Bloomberg, the Wall Street Journal (sub. req.) and the Washington Post have stories.

At Skadden, Lighthizer sought access to foreign markets on behalf of large corporations and litigated antidumping and other trade cases.

Trump said in a statement that Lightizer “will do an amazing job helping turn around the failed trade policies which have robbed so many Americans of prosperity.”